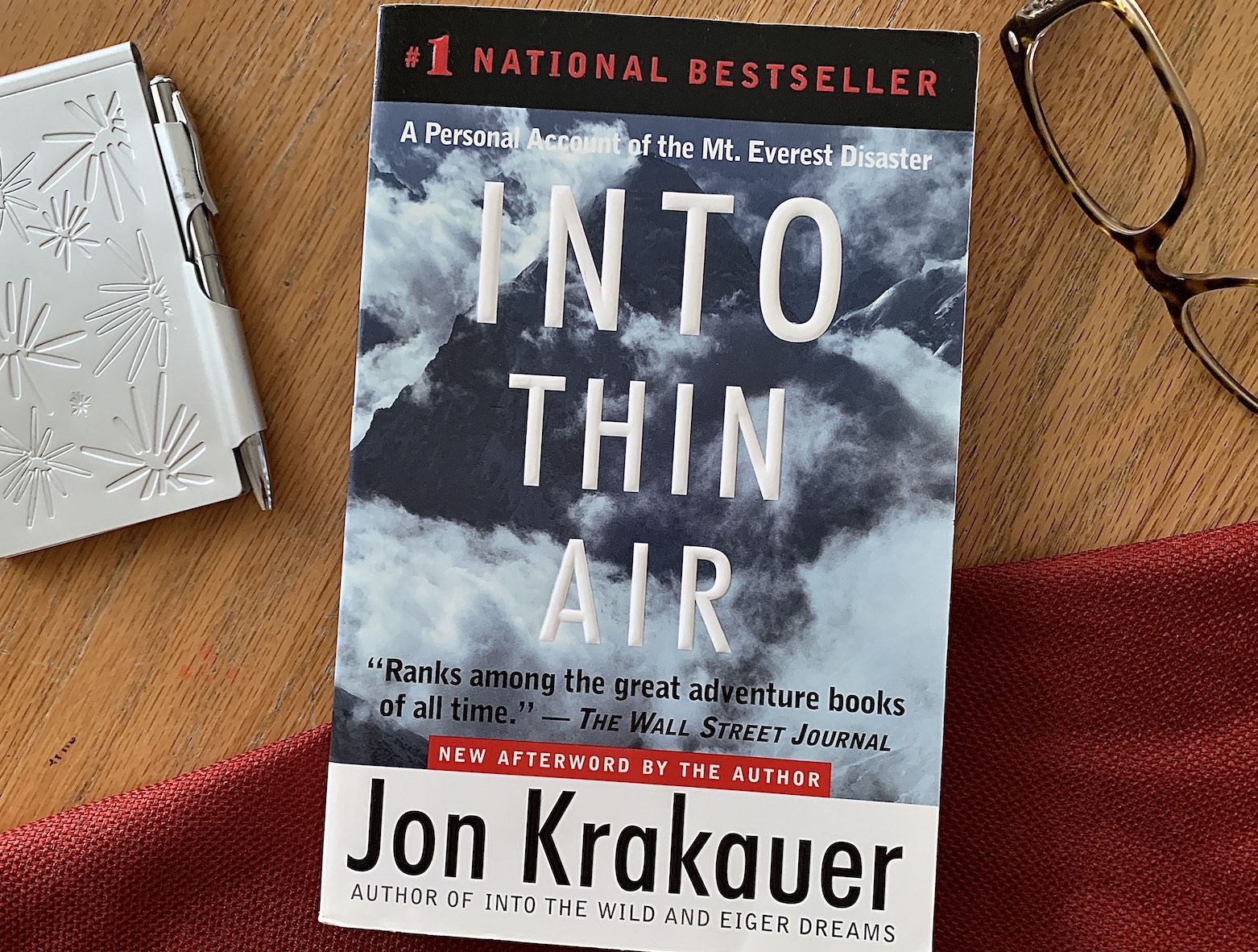 Are you moping because you’re missing traveling? Have you had to cancel a long-awaited trip or two, due to COVID-19? You’re not alone. But the good news? We still have a way to transport us to far-away lands: books. Back in the day (which, by the way, was a Wednesday), before long-distance travel was so common, people used to use books to whisk them away to distant places through captivating stories of action, adventure and drama. Luckily, we still possess that same superpower, and we can take much-needed breaks from reality with classic books like Jon Krakauer’s 1997 best-selling real-life thriller, Into Thin Air: A Personal Account of the Mt. Everest Disaster.

In May of 1996, journalist Jon Krakauer ascended Mt. Everest in an attempt to report why people would be lured to risk their lives through the adventures of mountain climbing. When he came back down, however, he found himself with the story of how he was able to hang on to his own life, and how at least 9 other climbers that spring were not.

Into Thin Air presents the true story of the events that occurred during what would become known as the 1996 Mt. Everest disaster. On the night of May 10, while several mountaineering groups navigated over the peaks of Everest, an unexpected blizzard would sweep over the mountain, to make the already grueling conditions of high altitude climbing even worse. Once the snow would cease, those who had sought to conquer the world’s highest mountain would have their lives taken by it.

As a freelance writer and considerably experienced mountain climber from Seattle, Wash., Krakauer was assigned by Outside magazine to write a story on the commercialization of Mt. Everest – located on the border between Nepal and Tibet in southwestern Asia. He enlisted in a guided tour group called the Adventure Consultants, led by renowned mountain guide and New Zealand native, Rob Hall.

Over the following three months, Krakauer and his companions – each of whom paid at least $65,000 to scale the mountain – would experience the brutal realities that came with climbing the elusive Mt. Everest. As they moved higher and higher toward the canopy of the sky, Krakauer and the rest of the group would go through the most mind-numbing of effects on the body, including temperatures 100 degrees below zero, the delusional effects of hypoxia (a lack of oxygen to the brain), and limbs paralyzed through frostbite.

Krakauer tells the painstaking tale of each of their stops on the way to the summit, in a step-by-step journey of the climbing expedition – from the lowlands of India, through the slippery icefalls of the Khumbu Glacier, and to the agonizing yet triumphant arrival at the summit, at over 29,000 vertical feet above sea level.

Krakauer, struggling to keep his sanity from the lack of proper oxygen at that altitude, tells readers about the bittersweet moment of reaching the top:

I’d been fantasizing about this moment, and the release of emotion that would accompany it, for many months. But now that I was finally here, actually standing on the summit of Mount Everest, I just couldn’t summon the energy to care.

But as Hall told his clients, anyone can get to the top of Everest, but “the trick is to get back down alive.” For the climbers of the spring of 1996, this trick proved to be an impossible one.

During the early evening hours of May 10, a blinding snowstorm rolled over Everest with little warning, leaving those who were conquering the summit of the mountain trapped on its higher peaks. Because it was impossible to move in such fierce winds and bitter cold, hikers were rendered immobile, and forced to stop in their tracks and take shelter wherever they were on the terrain.

However, the mountain offered them little shelter, and as they waited for the storm to die down, their oxygen tanks slowly ran out of reserves, leaving these climbers helpless. In addition, those who did attempt to make their way down to safety would become disoriented in the limited visibility and never make it back to the camps that offered them refuge.

Krakauer gives a firsthand account of his observations and experiences through each step of the mountain’s trail, which reveal what he believes really happened that season, and why things seemed to go so wrong. He includes detailed stories of each person involved with the expeditions, and shows how their interactions with each other may have impacted the entire group’s fate.

Into Thin Air depicts a brutally truthful and personal story of what it takes for humans to endure nature’s toughest tests, and how sometimes the tests cannot be passed. In the season that Krakauer describes as “the worst single-season death toll since climbers first set foot on the peak seventy-five years ago”, nature would have its way.