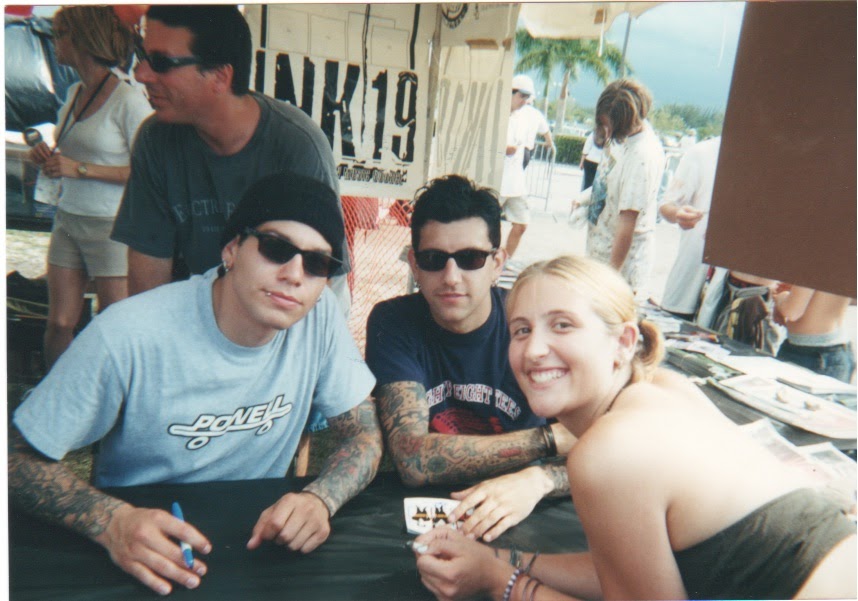 My best memories of the late ‘90s and early 2000s involve music shows. I lived in South Florida, and those of us who became friends at local rock shows called ourselves “show kids,” and it was so special to be a part of it. After I went out of state for college in 1999, I tried to make show friends in my new scene, but it just wasn’t the same. Nothing quite like that high school experience. But in Summertime, I was lucky enough to go back to Florida to work as a camp counselor, and I could meet back up with my other show kids to continue going to the one thing I looked forward to every year: the Vans Warped Tour.

Warped Tour started in 1995, but I think I started going in about ‘96 or ‘97. And I just couldn’t get enough. For high school, I had attended a conservative, private Catholic institution, where we had to wear uniforms, couldn’t dye our hair or have piercings, and we definitely could not have any tattoos. So when I went to a concert or a punk festival, I just reveled in the freedom of expression I was witnessing all around me, by musicians and fans alike. It was beautiful and liberating, and I enjoyed watching everyone’s freak flags fly.

The Warped Tour went all around North America, but I loved being back in South Florida for the fest, with the sun and humidity and the afternoon Summer storms, and the mud that ensued when the downpour began. This photo was taken in the year 2000, when I had just turned 19, with one of my favorite all-time bands, MxPx. This was a dream come true to meet them, to take a photo and get my CD booklet signed. I had just completed my Freshman year of college, when I had promptly liberated myself from Catholic school conservatism by cutting my hair short, dying it reddish-blond, and getting my eyebrow pierced. I could finally join in the freak show at Warped Tour, and I was psyched. I remember there was a huge thunderstorm that year, and I got totally soaked. I still have the ticket stub that got wrinkled from being saturated with the Summer rain.

At a different Warped fest in a previous year, I remember watching Blink-182 perform, and I made it up to the very front of the crowd, where I was slammed right up against the security gate, jumping and moshing so hard that one of my Airwalk sneakers fell off. I had a good friend with me who volunteered to dive down into the crowd of frantic, jumping feet to get it for me. I will be forever grateful to him for saving me from having to explain that one to my parents.

One thing that does strike me as strange, as I look back on my Warped Tour years, was how few female bands I saw while I was there. Now, as an adult almost 40 years old, I relate my staunch Feminism directly to my deep love for RiotGrrrl bands and female musicians like Bikini Kill, Bratmobile, Save Ferris, Dance Hall Crashers, and even more mellow artists like Tori Amos, Sarah McLachlan and Portishead. But back then, when we went to rock fests, we were usually there to see the bigger bands like NOFX, Rancid, Green Day, Mighty Mighty Bosstones, Less Than Jake and others, which were mostly male musicians.

I do remember watching Save Ferris perform, but looking back at the Warped Tour band lineups, it seems there were many more female bands featured over the years, like The Donnas, No Doubt, Lunachicks, Bif Naked, Bad Cop/Bad Cop, L7, Tsunami Bomb and others. I really wish I would have seen more of these artists play, and I am trying to figure out why I didn’t. Maybe the people I was with just weren’t interested, so I followed the crowd. Or, more likely, the female artists might have been scheduled at the same time as other more prominent male artists, and we had to choose who to watch. Or maybe I was just directed by my own misogyny that I internalized from what I heard and saw all around me, believing that female musicians just weren’t as good as males. I wish I could go back in time and see way more female musicians. But I’m trying to make up for lost time by following them online now, listening to them on Spotify, and seeing them in person when possible.

I continued going to Warped Tours for a few more years until college life got serious. At one point around 2002-2003, I was working a part-time retail job, had an internship at a magazine, led my local indie newspaper as the Managing Editor, and had a full course load in my Journalism major as I pushed ahead to graduate on time. Punk shows didn’t fit into my schedule much anymore, as I was trying to figure out what I wanted to do with my life and career. But I will always remember the Summer festivals, which always fell right around my birthday in July, that gave me an outlet to celebrate, dance, mosh, sing, scream and let loose with others who loved the music and the scene as much as I did.

This article appeared in a Zine published by “The Escapist Artist” called “Slutcake #9: ‘TEENAGE’ (JULY 2020)". You can visit TheEscapistAstist at their Etsy shop to buy the Zine, along with other awesome Feminist & RiotGrrrl Art, T-shirts, and more. If you’d like to contribute writing or art to future zines, contact Shop Owner Jolie Ruin at mrsnoggle@yahoo.com.